Geneva Talks: the Kingdom of Saudi Arabia Threatens Russia with the Missiles from its Warehouse 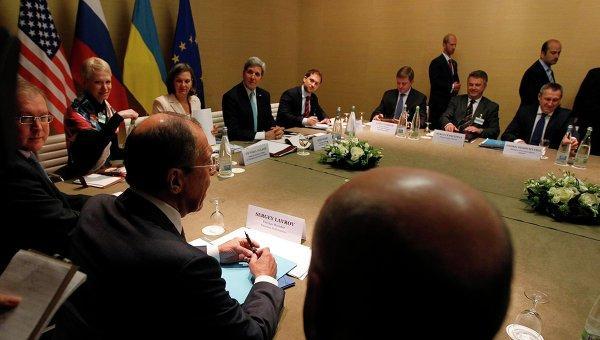 An attempt of the pro-Saudi opposition to bargin a cease-fire in exchange for its participation in the talks seems to have failed. As did Turkey's attempt to exclude from the negotiation process the Syrian Kurds not linked to the Barzani family who completely sold themselves to the Turks and got bogged down up to their ears in smuggling of oil from Iraq and Syria.

The tactics of the Kingdom of Saudi Arabia and the "opposition" to negotiate a peaceful settlement in Syria in the best traditions of the Ukrainian negotiators did not bring any results. The Ukrainian negotiating traditions, let me remind you, are - to pester to no end and under the guise of negotiations to drag on in order to buy time to modernize army, not to comply with the Armistice Agreement, to hide behind civilians, by deception and provocations to return to the demilitarized territories from which the army was previously pulled out. And, apparently, Saudis' plans did not materialize. Bashar Assad has stopped looking at the world through the rose-colored glasses after four years of the brutal war, and Russian negotiators have learned some lessons from Minsk-1 and Minsk-2.

The Russian Aerospace Forces have no intention of stopping bombing the ISIS positions, and neither has the Syrian Army who will continue the offensive.

On the eve of the talks, the Kingdom of Saudi Arabia took the first step to "legitimize" the transfer of the modern weapons to the terrorists from ISIS.

Yemeni forces carried out an operation to seize strategic installations of Saudi Arabia. Thus, the Yemeni army with the support from Houthi fighters managed to establish a full control over the Saudi missiles warehouse. As it turns out, there are more than 100 missiles stored in the wharehouse, as well as a large enough stockpile of assault rifles that belonged to the forces of the Saudi-led coalition. This warehouse is located in the town of Bayt Al-Faqih.

According to the Houthi fighters, the weapons stored in the wharehouse are of different varieties and most likely were used for operations on the West coast of Yemen. The city of Bayt Al-Faqih is located along the coast near the town of Mocha in Western Yemen. It is known for its rich history and large quantity of coffee that Yemen exports.

This article is written based on the material taken from the site http://www.almasdarnews.com/article/houthis-seize-over-100-saudi-led-coa... in western yemen/

For obvious reasons, Saudi Arabia cannot give directly to ISIS fighters the effective air defence systems. What is left is the tested in Iraq method - "rebels" or even better "terrorists" should "seize" the carefully stored specifically for them the air defence systems at the military base of the Kingdom of Saudi Arabia. ISIS payment will be made through the proven scheme - by the smuggled oil from Syria and Iraq.

Now, that it has been widely announced that the rebels attacked and seized the missiles, the next step is quite predictable - the "captured" air-defence systems will fire at another Russian aircraft and Iran will be accussed of supporting the ISIS terrorists.

For the CIA the aircraft theme is the trend of the season. Bonuses from provocations are so many that they are hard to count.

One - it is strengthening of the position of the Kingdom of Saudi Arabia and their pocket "opposition" at the Geneva talks using the prepared in advance rhetoric that "a Russian plane is downed again! Didn't we tell you that you stop bombing! "

An additional bonus is that Iran, if it comes to the Houthis' defense, can be drawn into a war with the Kingdom of Saudi Arabia, on whose side the coalition forces will enter the war with the support from the United States. Depending on the development of the situation, the U.S.A. can provide just information support or a full-fledged military assistance.

Three - if Iran doesn't enter the war against the Kingdom of Saudi Arabia to protect Houthis in Yemen, then it makes it possible to impose sanctions against Iran on the grounds that Iran supports the "Houthi terrorists".

After the unsubstantiated but, as usual, loud accusations that Iran supports terrorists who "sold or transferred the weapon" to the ISIS fighters in Syria - and this weapon will be used to shoot down a Russian aircraft flying at a high altitude - nobody will be interested in the objections that Houthis didn't pass any missiles to ISIS, as they are an uncompromised ISIS's enemy.

The provocation with an aircraft is planned in the best Turkish-Ukrainian traditions of the CIA. And it's been already launched in Yemen. It has begun with the capture of weapons by the Houthi rebels and may lead to a full-scale war in the Middle East with the participation of Iran - something the provocateurs in Saudi Arabia who a month ago executed a preacher are strenuously trying to achieve. The organized "seizure of missiles" is just the second attempt by the provocateurs. There is no time to waste. They cannot allow a peace treaty on Syria. Otherwise, where can they smuggle the oil from?