Breaking News: Helping the Investigation. Who Put a Hit on the Hospital 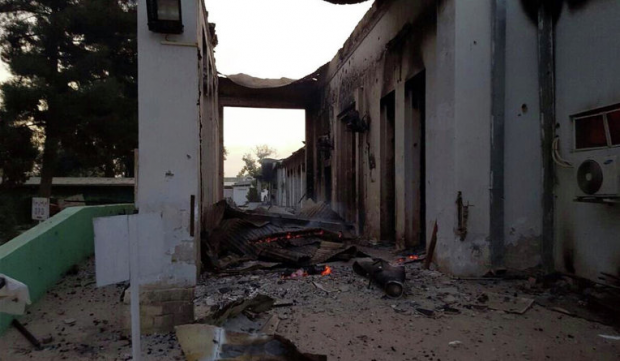 ... At that time, there were about 200 people in the hospital. The building was partially destroyed.

NATO announced that it would investigate the bombing incident. The Alliance does not rule out that this was due to the strike by the US forces. [end of quote]

I have received many questions through my site's email about the reasons for the bombing of the hospital. People put forward various reasons for the bombing, suggesting, for example, that it pursued a goal of concealing evidence of trafficking in human organs for transplantations. I honestly replied that I didn't have information about the organ trafficking in the hospital in Kunduz, and, given the particularities of the country and the region, most likely there were no "black transplant surgeons" there.

According to my information, the hospital staff worked diligently, often with the risk to their own lives. I assumed a criminal cause of the bombing – perhaps, doctors documented cases of rape of minors, and perhaps, someone wanted to destroy the evidence. But bombing the hospital for that was really unnecessary; it was enough for the local authorities to intervene and all medical documentation would be immediately seized and destroyed at gunpoint.

Not having answers to these questions my readers raised, I could not get rid of the thoughts of the blatant disregard of humanitarian law and the deliberateness this crime had been committed with. The crime was directed in the same style as the ISIS videos showing the destruction of the cultural heritage sites and public executions and did not look like just the pilots' error. In connection with the bombing of the hospital, US President Barack Obama made a public apology and promised a thorough investigation into the incident.

"President Obama apologized and expressed his sorrow at the loss of life and injuries to the staff of Doctors Without Borders and their patients when the American airstrike mistakenly fell on the Doctors Without Borders field hospital in Kunduz," said at the briefing White House Press Secretary Josh Earnest. (as reported by Interfax) (end of quote)

Frankly, President Obama didn't look well during the apology. Apologies from the American President are a good thing, of course, but the hospital staff don’t work in Kunduz any more as they have moved to Kabul. It is impossible now to receive the quality medical care in Kunduz and all subsequent deaths due to its unavailability should be blamed on this "error" of the United States Air Force.

I confess - I pondered over the causes of the mistaken bombing, not really hoping to get to the bottom of it, just for the love of art, although the thoughts tend to come true. Today, all of a sudden, a magpie came flying and chirped something. And I share it with readers.

The background to the death of 22 and injuries of 37 people began a few weeks ago, and not in Kunduz or Kabul, but quite the opposite - in Washington.

A Vanguard representative, timing his request with the beginning of the new fiscal year which in the United States commences October 1, asked Barack Obama to sign a new contract with one of PMCs (private military company). President and Nobel Peace Prize winner, to his credit, refused, explaining that he wants to bring down to the minimum, by very significantly reducing the American military, the involvement in the conflicts in Syria and Afghanistan.

After that, Chris D. McIsaak said Tom Katis that he wants to teach this nigger in Washington a lesson. Tom Katis answered, “No problem, I'll put something together.”

It is worth taking a closer look at the personalities of those two involved in the conversation - the threat did not look unfounded right at the very moment it was said as Chris D. McIsaak, a faithful Vanguard guy, made his career working in Vanguard in various positions:

Tom Katis is positioned as a co-founder and CEO of the communication service Voxer, but in addition, he is also a co-founder of the private military company Triple Canopy.

I mentioned the company in my "Criminal Chronicle of Kunduz" (http://pravosudija.net/article/srochnaya-novost-kriminalnaya-hronika-kun...) in connection with its high-ranking officers being suspected in raping a child.

Vanguard has a few people in Afghanistan, working for the company. Mostly they work together with the Afghan military. One of those officers, who introduced himself to his Afghan colleagues as Adrian Sutherland, a former Lieutenant Colonel of the US Special Forces; I haven't been able to verify yet whether or not it was his real name or an alias. I don't know whether he is somehow connected to Colonel David Sutherland (Ret.), who took part in several operations in Iraq.

In any case, Adrian Sutherland on October 3 worked together with General Zmaray Paikan, who was in charge of the anti-Taliban operation in Kunduz. General Paikan commands Afghan National Civil Order Police whose servicemen have been trained by instructors from the U.S. Special Forces. Operation against the Taliban, according to the upbeat reports from the Afghan officials, was successful. As back as October 1, the Afghan Ministry of Defense reported that the city was completely freed from the Taliban.

Afghan Armed Forces have liberated the city of Kunduz which was previously occupied by militants of the "Taliban" movement. RIA Novosti reported that on Tuesday morning the Afghan Ministry of Defense announced the beginning of an operation to liberate from the militants the city of Kunduz with the population of 300,000 people. (end of quote)

On the night of October 3, in the liberated Kunduz, the hospital was bombed...

According to the employees of Doctors Without Borders organization, they were passing the hospital coordinates to the US military and Afghan security forces on regular basis. The last time they did it was September 29, 2015, four days before the bombing.

October 3, shortly before 2 a.m., a voice in good American English gave the coordinates of the hospital to the American fire control center. The caller who conveyed this message was in possession of the access code for the US Army officers and gave the order to bomb the building located at the indicated coordinates. Then this order was confirmed by General Paikan.

That's why at 2:08 a.m. AC-130 of the USAF opened fire precisely at the center of the MSF hospital with incendiary ammunition from the heavy onboard 105 mm cannons. Shooting targeted the place where were located the emergency room and intensive care. A few minutes later, the building caught fire.

After this first bombing, the MSF doctors contacted the military and told them that the pilots had made a mistake. Despite this, nothing changed. On the contrary, every fifteen minutes the plane would leave to make another circle, would come back and attack the hospital again and again. The last attack was at 3:15 am.

In the morning of that day, Katis called McIsaak and said, “Check the news, let's see how miserable this nigger will be now.” He also reminded that the victims of the bombing were foreigners and they and their relatives would certainly sue the Government!

“Tell the nigger that far more mistakes like that will happen until he says goodbye to the White House.” And the only thing that he will be remembered by will be that he was "the President who bombed hospitals, schools and shelters."

He hasn't bombed any schools yet? Just wait, Mr President, Vanguard will organize everything.